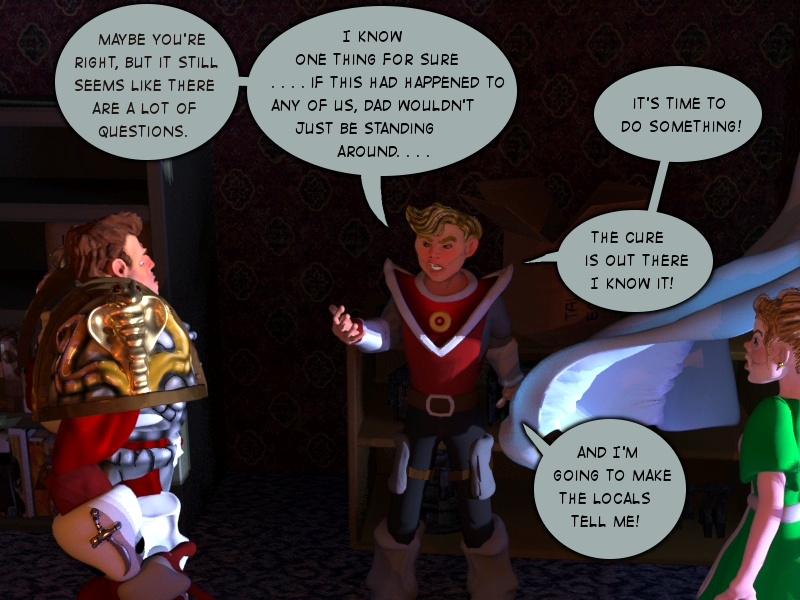 warp9
Sorry for the delay in posting. I really wasn't happy with the flow of the dialog in the last page I put up, and I made up my mind to redo it. And then life has been a bit crazy. I kept thinking I'd get back to work on the comic, but more stuff always seemed to get in the way. . . .

Anyway, I've added this page here, and fixed the dialog on the previous page. Now the stage is set for Kendrick to head out.

As mentioned previously, the original plan was to have a lot more text. In some ways, the extra information is irrelevant to the basic point that Kendrick wants to go on a quest to save his dad. However, I think that there is some useful info that I would be skipping over. . . .

Specifically, the extra text would have explained why Kelly and Walt are not with Kendrick on his quest, and outlined a bit of the possible consequences of pushing forward in that line of action.

Walt and Kelly feel that the quest is a bad idea. They believe that prying too deeply into the issue of the alien-wasps will lead to even nastier entities which the wasps are associated with. And that this will lead into the realm of "things-mankind-was-not-meant-to-know." Which, in turn, could easily result in the destruction of everything they have.

The original plan was to end the scene on a final page with Kendrick saying that he doesn't care about the consequences, that he'll save their dad, and deal with the price-tag later.

I like the extra text. It does give some important context to Kendrick's Quest. If this work was a more traditional novel, it would definitely be included. Unfortunately, I'm not sure it works for a comic format (at least not as I've set things up). If I went with the extra text it would mean several more pages of them standing around discussing things, and I'd prefer to move forward more quickly.