Comic 34 - And the chase continues 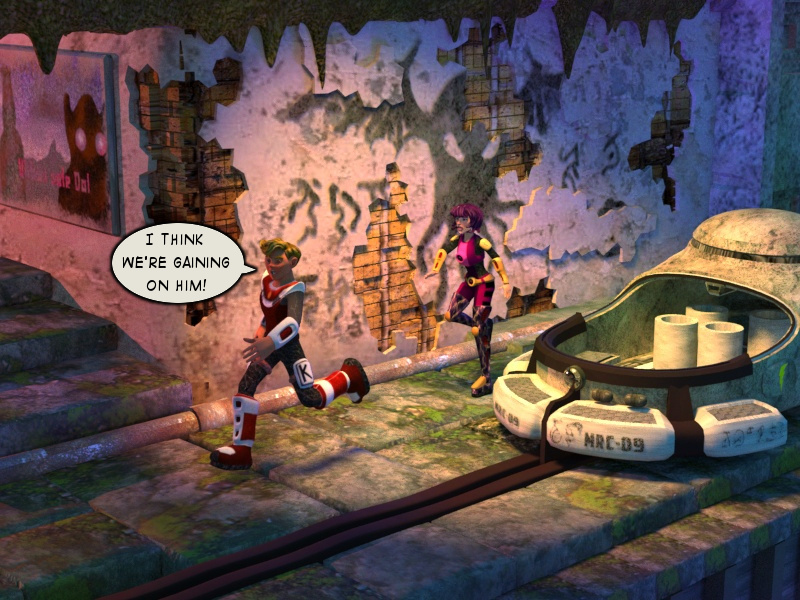 warp9
Wow, it seems like this chase has been going on for months! Kendrick and company must have amazing endurance!

I'm sorry it has been so long since my last update. A whole bunch of things have happened. I made a decision to take a bit more time with the comic, rather than focus on getting things out quickly (I felt like some of the pages were being rushed).

And that concept worked fine for a bit. However, when I stopped trying to get the pages out as rapidly, it meant that I could also focus on other things in my life, which I did. And as things happened in other parts of my life, the comic ended up on a back shelf.

This page has been about 80% finished for the last few months, but I'd gotten out of the habit of putting time into this work, so it just sat there.

Anyway, we continue the case with Kendrick. We learn that he is assisted by a purple haired friend (who was not visible on the previous few pages).

As is also probably obvious, I have continued to experiment with the model for Kendrick. I was actually pretty happy with the previous model from a purely visual standpoint, but I am trying to get something that I could do animations with (which would have been a bit harder with the older model).

Lee M
Likewise, welcome back. Ed Kline and I are very familiar with life issues getting in the way of comics (our comics haven't updated since weeks before your last page), so by all means take whatever time you need to update.

warp9
I definitely appreciate your understanding. :-)

And I hope that things are going well with you and Ed. It will be nice to see more of your comics, but as you say, sometimes life makes it hard to do regular updates.