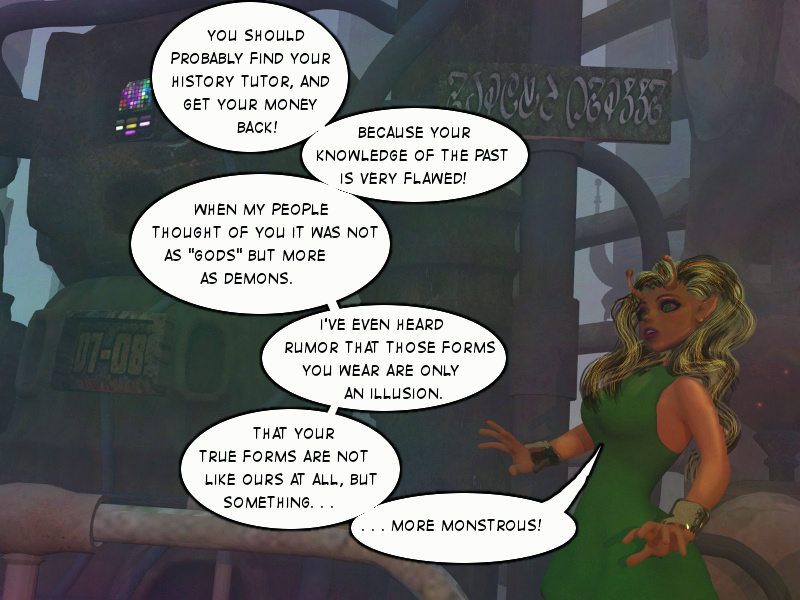 warp9
Lumi seems to have different views than Willy on a few things, but which one of them is correct?

Hopefully everybody had a nice holiday season. Sorry I have been a bit slow to post this page. But there are a few matters that have been in the way.

First, I'm working on a Cthulhu and the Gun-Lords computer game (I'm making it in C++ and using OpenGL for the graphics). And the progress with that game has sort of gotten in the way of the comic.

Second, regarding the comic. . . there is a point, a few pages in the future, where I come to a crossroads, where I could choose to go in various directions with the story. Previously, I had a pretty clear path visualized that I'd wanted to go down, but I've been second-guessing myself on that matter. This uncertainty is giving me reason to but on the brakes a bit, as we approach the crossroads.

chris-tar
I think it would be great if you could post your works in progress regarding your "Cthulhu and the Gun-Lords computer game". Perhaps videos and screenshots with explanations. I am very interested in making my own video game one day as well, and would love to see your process. Thanks!

warp9
Absolutely! I'm very glad to hear that there is an interest in my game! :-)