Comic 71 - Somethings a good disintegration is just the thing. . . 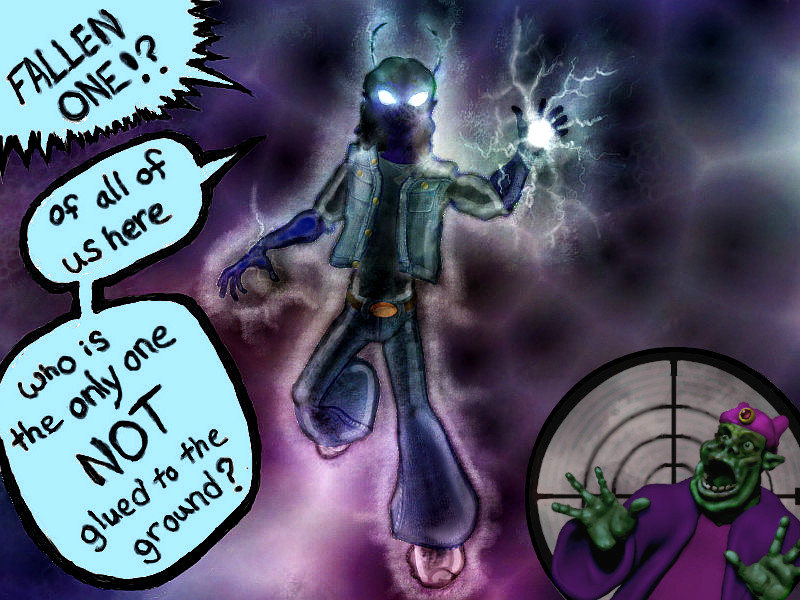 warp9
Looks like somebody hit a nerve--not that this was that hard to do. Willy doesn't know that much about his own people, so there are many uncertainties about his own true nature. And all this talk about "fallen ones" is a bit too much.
Moreover, Willy often feels disrespected, so that's kind of a sore spot too.

Art-wise, there was a bunch of experimentation with this panel. I tried doing hand-made lettering this time. It is not as neat as my usual font, but it seemed like it might have "more character " this way.

On a slightly different front, it occurs to me that I've been doing this comic for about a year now. I'll have to have a birthday party!

One year in, there are not as many pages up as I was expecting. Still, I've averaged more than 1 page a week so far---I guess that is something.

Taking a look back over the progress of the comic so far. . .

It might have been better to plan things out more, in greater detail, but I figured that I'd be making mistakes for my first comic, pretty much no matter what. So my philosophy has been : just do it! And I do have a general plan for the story, but I kind of play out the page-by-page specifics as I go along.

I'm pretty happy with "Part 1 : The Tomb Robber." There are always things one could do better, but all things considered, I like how this first part turned out. The goal was to get an intro story that people could understand, without needing very much exposition, and I hope that came through.

Unfortunately, I'm a bit less happy with "Part 2 : Kendrick's Quest." I've had multiple versions of Kendrick in my mind. I'd assumed that they would coalesce into a single character, but that never happened. I've changed the character's design a few times. And, I'm still not really happy with Kendrick's look (which probably makes sense, given that I don't have a single clear vision concerning this character). At least I've got a Kendrick-Model that I can pose easily, but that is a pretty low bar. Furthermore, I'm not completely satisfied with how I handled the chase scene. To sum it up, I'd like to have handled Part 2 better.

In Part 3, there has been a bit of a shift of gears. Here we've been dealing with some new characters, like Lumi, and Willy. I've been mostly setting things up for stories that will come later. This part still ties to Kendrick and his Quest, but it could be a tighter narrative if I'd cut some of the "non-quest-relevant-stuff" out, and kept the focus on Kendrick. Yet, these other stories are important, so setting these other things up is something I want to do. This part of gone on for more pages that I'd originally estimated, and I hope that it hasn't seemed like too much of a distraction from the story about Kendrick's dad.

chris-tar
The green guy has the "Homer Simpson DOH!!!!" expression on his face. "DOHHH!!" Oops, too late now.

chris-tar
Happy anniversary. You are doing a great job. Keep it up!

warp9
Thanks for the vote of confidence, it means a lot to me! :-)

And, more generally, I'll add that I very much appreciate that you take the time to post comments here.

chris-tar
I appreciate your replies as well.
I don't comment on everyone's comic, just the one's that appeal to me personally for some reason. With this comic, I see a lot of hard work and skill has been used to make it. Plus I have a fascination with computer programming and science that stems from my youth, so your behind-the-scenes information is educational.
Lastly, comic fury is a unique place to me in that other really creative and artistic people post their work here. I don't meet people like that in every day life. I also just like to talk to people. Ha ha. But again, it's not like talking to people on Facebook for instance. comic fury people are different.

...(RockB)
The major part of this pages looks deceivingly simple with a floating Willy and some energy-fuzz around him.

The green guy "feeling like he stands in front of a shooting target" is just great, super cool message delivering :D

dougwarner59
He does make a good point.